The week leading up to the climb, the office was full of preparation chat…”Pack plasters for blisters, we might need SPF, waterproofs…etc”. All Lorraine and Emma Jones seemed to be packing was a flask of tea – they run on caffeine and Kim even started preparing a playlist; ‘Ain’t No Mountain High Enough’ – Marvin Gaye, ‘The Climb’; Miley Cyrus, ‘The Hills are Alive with the Sound of Music’…you get the drift.

The morning of the climb got off to a shaky start when a senior member of the team (Emma J!!) slept in…cue stifled giggles when she eventually arrived to the bus. Everyone mentally banked a pass for a late office start for the future.

The ropey bus journey helped to take our minds off the challenge ahead. Half way, we stopped to refuel with caffeine, jambons and sausage rolls. We Were Ready!

We arrived at the hotel and got ourselves ready. In our Thomond t-shirts and blue jackets, we thought we looked the part anyway.

It’s fair to say we got a sharp shock when we started the climb. Haribos, Fruit Pastels from Heather and the amazing views kept us all going.

We all got passed the first steep part of the mountain and the next part was relatively flat. Harry our mountain guide told us the first hour was the hardest. We looked at what was ahead of us and deduced Harry was lying. We stopped for a rest and a ginger ball (recipe enquires to info

Right, let’s do this. The terrain of the ‘cone’ had very loose rocks. Team work went out the window. There was no looking back to see if we were all there. Eyes were firmly planted at our feet watching each step. It was every man for himself.

One by one, we persevered and arrived at the summit. High fives and weary hugs, we were delighted and the views were breath taking. A few photos later, and one with John and a friendly sheep (insert raised eyebrow emoji) the task ahead of getting down this mountain began to dawn on us. But get down we did, bum slides whatever it took and the team all reassembled at the bottom of the cone. The endorphins were flowing now, and the smiles returned to our faces.

The descent seemed to go on forever. Our muscles were stiffening and even though the groans from each of us were getting louder, we focused on the free alcoholic drink at Campbell’s at the bottom of the mountain.

“Wouldn’t it be mad if one of us fell now”. Words John would regret when not two minutes later he landed on his bum prompting hysterics from Lorraine! If only we had our phone out to catch that moment. Pure Gold.

Hooray, the gate was in view…we finally made it to Campbell’s. The Bulmers tasted like sweet honey. “Cheers” and we clinked our glasses. We did it!

We’ll leave you with some wisdom from Joy; “I know why Saint Patrick stayed up there for 40 days…he couldn’t face the descent.”

Thanks to Brokers Ireland for a very well organised and fun event and to FBD and all the other co-sponsors for a great day. Also a special thanks to Ciaran and Brian for looking after us on the mountain.

See you next year….? 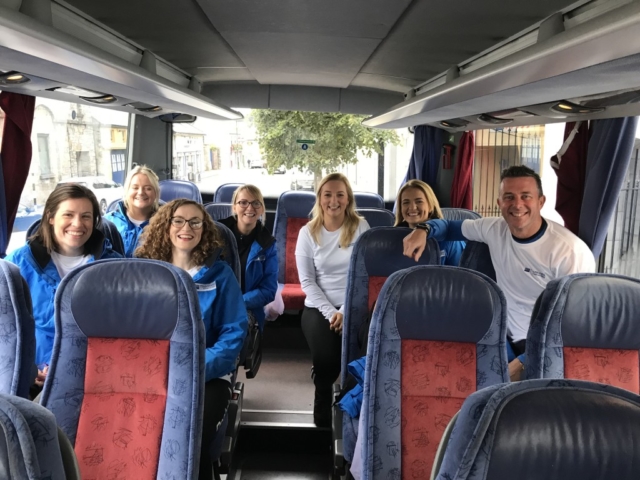 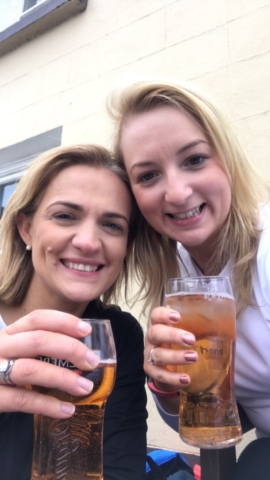 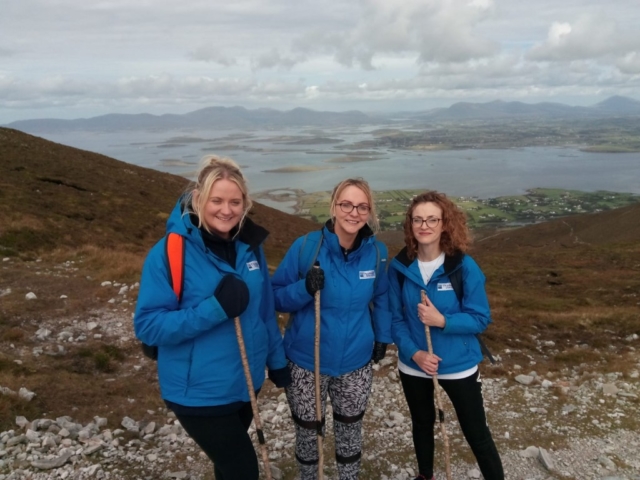 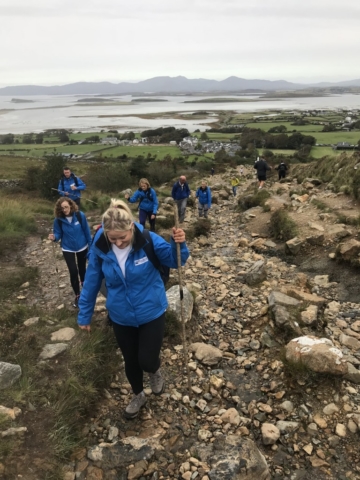 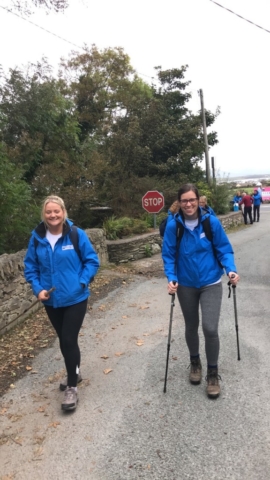 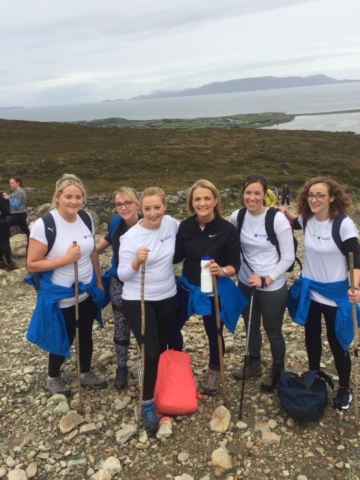 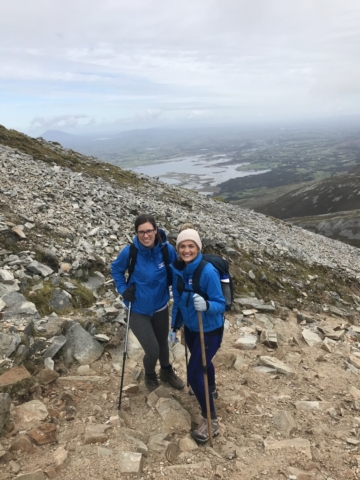 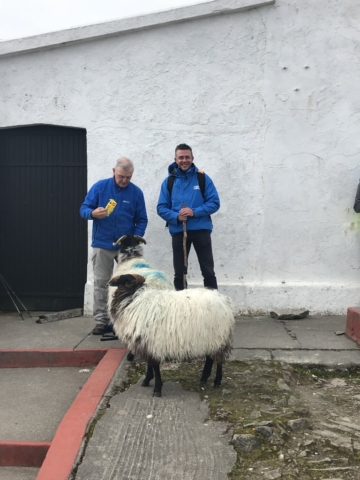 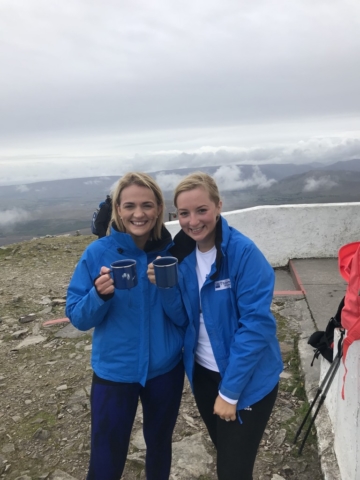 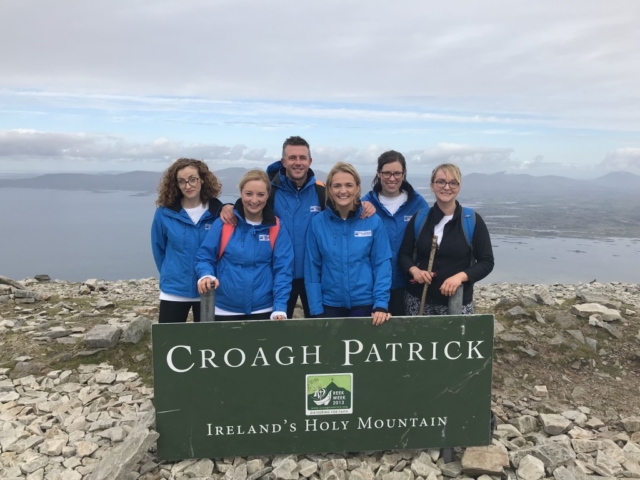 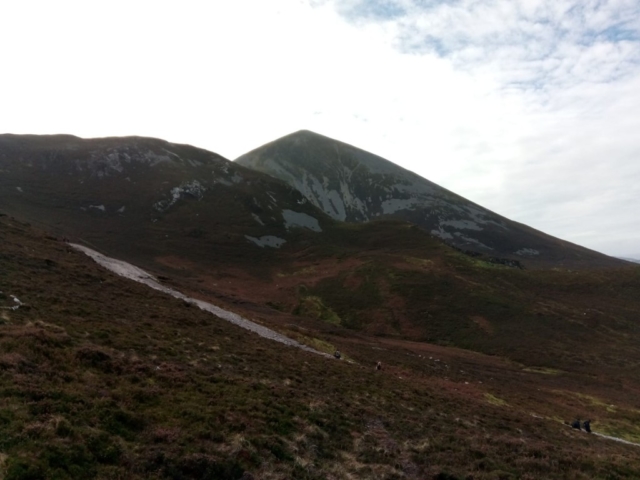